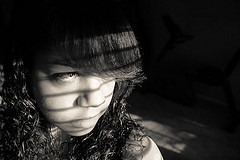 I remember having to put my child down in his crib, crying, and walk away. I would never ever hurt my baby, but in that moment I was so angry. I needed to yell and scream and I knew if I did any of that near my son, I would scare him.  So I put him down, walked away, and screamed into a pillow until the moment passed.

When I experienced postpartum depression with my son, I certainly had days where I cried and felt sad. I had others days where I felt nothing. I was numb, me body, my heart, they both felt disconnected. But the worst days were my angry days. The days I felt complete rage at everything; friends, the world and myself, the situation, my family.

I would pick fights with my husband, I yelled at our pets, I kicked the couch and punched the pillows. The hardest part of the rage was when it turned inward. Rage, when directed at yourself, looks and feels a lot like hate. Everything about me was hateful and in my anger, it was easy to blame myself for everything.

You can’t talk about rage being a symptom of postpartum depression. If you do, people think you are going to harm your baby. They assume that focus-less anger will find a target, your defenseless child. That couldn’t be further from the truth. No matter how angry I was my child was always safe.

The stigma around rage made me try to hide it. When I finally walked into my psychiatrist’s office, I was sure I was insane. No one talked about irrational anger as a symptom and I was convinced that if I admitted how angry I felt about everything, she would call CAS and my child would be taken away.

I was terrified. I promised myself I wouldn’t say anything. Then she started reading through the list of symptoms and asked me which ones I had. Rage, anger, irritability was on the list. I was so surprised; it popped out of my mouth that I had those feelings, before I even realized I was answering. And nothing bad happened. She just asked about the next question on her list. It turns out, rage is normal, many people experience those symptoms. I wasn’t the only one!

For me, anger was part of my depression. Depression isn’t always sad. It might have been easier if it was. There might have been less fear, less stigma, and less anxiety if I had just cried all day. The anger I felt made me a different person, a person I didn’t like. Getting help allowed me to go back to being the person, and the mom, I wanted to be. It took time, but I learned that I deserved to feel better.