In the end, I decided it was important information to share.

You see, the picture was about breastfeeding in public. It was an announcement from the Ontario Human Rights Commission that it is your right to breastfeed your child anytime, anywhere. You cannot be asked to leave, to cover up, to feed in a bathroom, nursing room, or your car. You should never be told to schedule your outings around your child’s mealtimes; you do not have to pump and bottle-feed your child while out in public.

I thought that this was common knowledge in Ontario. I thought (naïvely, it turns out) that we had mostly moved past that here. But the story of two women who were allegedly asked to leave an Ontario restaurant reminded me that we aren’t quite there yet.

Something else stood out about the picture that was unique. I think it is why the picture was shared over 100 times from our page; the child in the picture was just that, a child. Not an infant. Not a young baby. The little boy in the picture appears to be around two years old, highlighting the recommendation by Health Canada to breastfeed for two years or beyond. Many women find that, while there is acceptance for breastfeeding a young baby, they face considerably more opposition when they are nursing a child who is older.

Hopefully this campaign helps to bring more acceptance, and let everyone know that breastfeeding is protected. 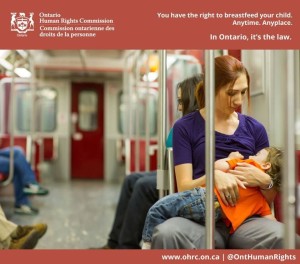