By now, most of us have seen the screen shot of a conversation between an expectant mother and a birth photographer. The photographer refuses to take the client because a “c-section isn’t birth my dear”.  One almost expects the line “No pictures for you!” The image was posted to the Sanctimommy Facebook page, a page dedicated to satirically mocking the “mommy wars” and judgment that many new parents encounter. The humour on the page isn’t for everyone, so read at your own risk! 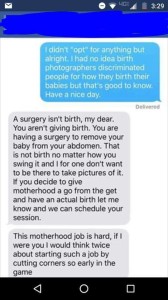 Back to the photographer.

The good news: it’s fake. It has been suggested that the person who originally posted this screenshot has, in the past, made up similar stories all in the hopes of going viral.

The bad news: it worked because it seems completely plausible.

It seems plausible to so many people because this attitude does exist. There are too many times when new parents are shamed for the way they gave birth or are planning to give birth. Where their choices are mocked or dismissed. There is an attitude in some circles that those who have caesarean births simply did not try hard enough. Some believe that caesareans mean parents gave in to pressure from an OB.

This judgemental and narrow view is not reflective of reality.

The truth is that pregnancy and birth are complicated subjects. Not necessarily medically complicated, although that can certainly be true, but complicated in the way that they impact individuals. Here in Ontario, elective caesarean birth is not as much of a thing as it might be elsewhere. However, there are many reasons why a person could have a scheduled caesarean birth:

The reasons for a scheduled, or unscheduled, caesarean birth are not always evident, or revealed to everyone, and feeling judged for the circumstances of their birth can turn a wonderful and happy occasion into a difficult and frustrating one for many new parents.

As doulas, we know we are fighting a history of judgement from other doulas regarding epidurals, inductions, and caesarean births. In the past (and unfortunately, the present), doulas have judged, condemned, and even left families when it was determined a caesarean would be needed.

We are not those doulas.

Our doulas will never judge you for the route your birth is taking. But she will stand beside you and encourage you every single moment.