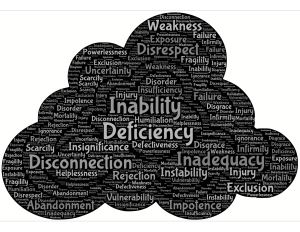 Today is Bell’s Let’s Talk Day. It is a day to shine a light on mental health. Every phone call, tweet, share, and #BellLetsTalk will result in a donation to mental health initiatives. We could have let today pass unnoticed. We could have acknowledged it with a tweet and a share. We didn’t. We wrote a blog post because this is too important to ignore.

Every year, on Bell Let’s Talk day, Meaghan has shared her story. We use the hashtag #iamenough a lot here at Toronto Family Doulas. For a while, she forgot that, and there was a lie playing in her head.

This year, that story has a new chapter.

Three and a half years ago, my first son was born. My labour and birth were difficult. After, I contracted a terrible infection and had to be readmitted to the hospital for treatment. It was scary, and I was so weak I could barely hold my own baby. In those dark moments, the depression that had come and gone for years slid into the back of my mind and sunk its hooks in.

For three months I blamed everything else; breastfeeding problems, sleep deprivation, hormones. I felt the stigma of depression and I didn’t want to admit that I was in that pit.  Finally I reached out for help.

It was a disaster.

My doctor at the time was horribly uninformed about postpartum mood disorders. He told me that I was fine, and we would check in a month later. He also told me he would not give me any medications unless I ceased breastfeeding. I knew at the time that it wasn’t true that I would need to stop breastfeeding, but it had taken so much courage to even raise the topic that I didn’t have the strength to argue with him.

I went home in tears.

I was lucky. I had incredibly supportive people around me who encouraged me to go back to my doctor and tell him that time was something I did not have. I took him the referral form an asked him to fill it out. A week later I had to call, prompting him to actually fax it in.

It should not have been so hard.

I was lucky. I knew the resources and where to look for them. My first language is English and I have a supportive family. Not everyone has these same resources. Not everyone has this support. For them, fighting for help is nearly impossible. If it isn’t accessible, easily and readily available, they might never get it.

The program I ended up in was wonderful. A psychiatrist who specialized in perinatal mental health ensured that I got the help I needed. When I was ready for another baby, she helped me to wean off my medications, and monitored me during my pregnancy.

Following the birth of my second baby, she met with me regularly during the early day. I was likely to relapse with a postpartum mood disorder and she wanted to help me if it happened again.

For a while, I did well. My labour had been easy, and I was grocery shopping just 36 hours after he was born. At just eight weeks postpartum I started back at administrative work for Toronto Family Doulas. My perfect little sleeper tagging along with me. I was busy, and active. Feeding was going perfectly, I was getting plenty of sleep. I was happy.

Then the doubts started creeping in.

Depression is cruel, but anxiety is sly. It isn’t obvious at first. It starts with you second guessing yourself. Your decisions. If you completed a task. After my first son, I struggled with depression. This time, it was anxiety that gripped me first. Stresses from other things in my life amplified that anxiety.

I stopped believing that I was enough. I stopped believing in my own strength, in my ability to be a mother, even in my ability to be a doula. The voice that told me I am NOT enough was lying. On some level, I knew that, but it was hard to remember at times.It took some very special people, alongside my very supportive family, to remind me that I am absolutely enough. And it took medication to help settle my anxiety, and the depression that came after.

I still have bad days. Some days, I have to remind myself over and over that I AM ENOUGH, because I need to drown out the voice that tells me I am not. The But I know that I have the right support system in place to help me get there. I know that my family, my friends, and my medical team are all there remind me on those days that I forget. 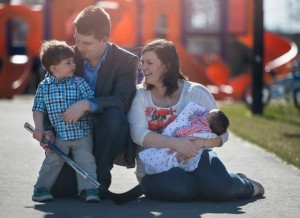 Of all mental illness, I think postpartum depression is the most understood and the least stigmatized. But it absolutely comes with stigma. Our society and culture still doesn’t realize that mental illness is no different that physical illness. We don’t tell someone with diabetes to just smile their illness away. If someone breaks a bone, we don’t tell them to try “just feeling better”. But that is the message given to people struggling with their mental health.

So please, today, talk, tweet, and share the Bell Let’s Talk images. Make an impact. Change a life. And hold out a hand to those who might not have the support they need.